Do You Live In One of the Top 5 States With the Most Hail Damage?

Where there’s a thunderstorm, there is often hail – and where hail falls, there is usually property damage. In the United States, hailstorms can happen in any part of the country, but most commonly occur in the central and southern plains states stretching from Texas to the Dakotas, a region known as “Hail Alley.” During the spring and summer months, warm, moist air from the Gulf of Mexico moves northward, colliding with cold, dry air from Canada to create violent, hail-producing thunderstorms.

The damage left after a hailstorm can be staggering. According to the National Oceanic Atmospheric Administration, hail causes about $1 billion in damage to property and crops each year.

2016 was a particularly devastating year of hailstorms in Hail Alley, and the costliest on record. According to National Insurance Crime Bureau analysis of insurance claims from the Insurance Services Office Claim Search database, Texas led all states in hail damage claims in 2016. Total claims filed numbered 378,652 following a rash of major hailstorms in the densely populated areas of Dallas/Fort Worth and San Antonio. Estimated insured loses reached $4 billion.

Texas’s 2016 tally of hail claims was more than quadruple the number of hail claims of the next leading state, Colorado, with 90,002 claims. Colorado’s Front Range is located in the heart of Hail Alley. 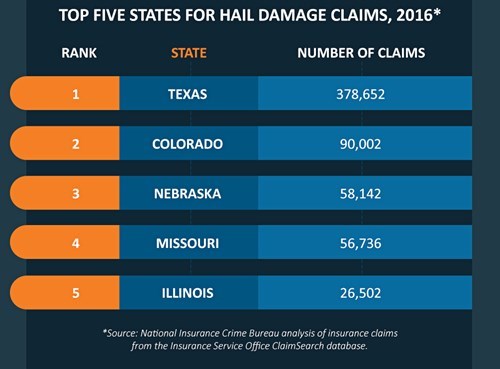 Even the best preparation can’t avert all hailstorm damage, but there are things you can do to increase protection for the structures you build or remodel. Siding is a critical component of a home’s building envelope that is often overlooked. LP® SmartSide® engineered wood siding offers excellent protection and has been tested to resist impact from 1.75-inch hail at 81 miles per hour! LP SmartSide products are also backed by a 50-year prorated limited warranty that includes limited hail coverage, plus a five-year, 100 percent labor and material replacement warranty.

How to Approach Your Siding Project Like a Pro

Re-siding your home can completely transform its look and increase curb appeal exponentially, but completing a re-side is a big job and a significant investment. If you’ve never done it, it’s hard to know what to expect and how to prepare for a siding replacement.

To keep pace with the last several years of changes related to homebuilding, you likely need to shift your business plan—let’s take a look at a few ways to navigate this.

Communicating the benefits of the LP® Structural Solutions portfolio for a sub-floor kitchen remodel or sub-floor bathroom remodel can be a key difference in positively reinforcing the value of the overall renovation.

The Importance of Vented Soffit

LP® SmartSide® Vented Soffit provides continuous ventilation for the roof, and it’s made with the same durable materials and and boasts the same great aesthetics as LP SmartSide Trim & Siding.