We’re excited to give you a look inside the re-side project of homeowner Liz Marie Galvan of the Liz Marie Blog. Be sure to read part one of our series with Liz Marie to see her initial preparation for her re-side, including how she used the LP® SmartSide® siding visualizer tool to explore home siding ideas and modern design examples.

After selecting prefinished LP SmartSide ExpertFinish® Trim & Siding for her 1800s Michigan farmhouse, Galvan was ready to get started transforming her home with one of the most durable siding options on the market. Let’s join her on the process and see how the project turned out!

With her re-side project Galvan set out to make sure her siding matched the 1800s history of the home, both in style and color. “When we first moved here in 2016 we painted our house, and the paint was already starting to show wear and tear,” she says.

The existing siding was aluminum, and the look of that type of siding didn’t exactly match the modern farmhouse look Galvan wanted. “We noticed, from an original photo of the home, that the siding was much larger than the current aluminum siding,” she says. “We wanted to get the same look as the original.”

With a wider profile, factory-applied paint and longer lengths that contribute to fewer seams, LP SmartSide ExpertFinish siding could help bring Galvan’s farmhouse back to its former glory. 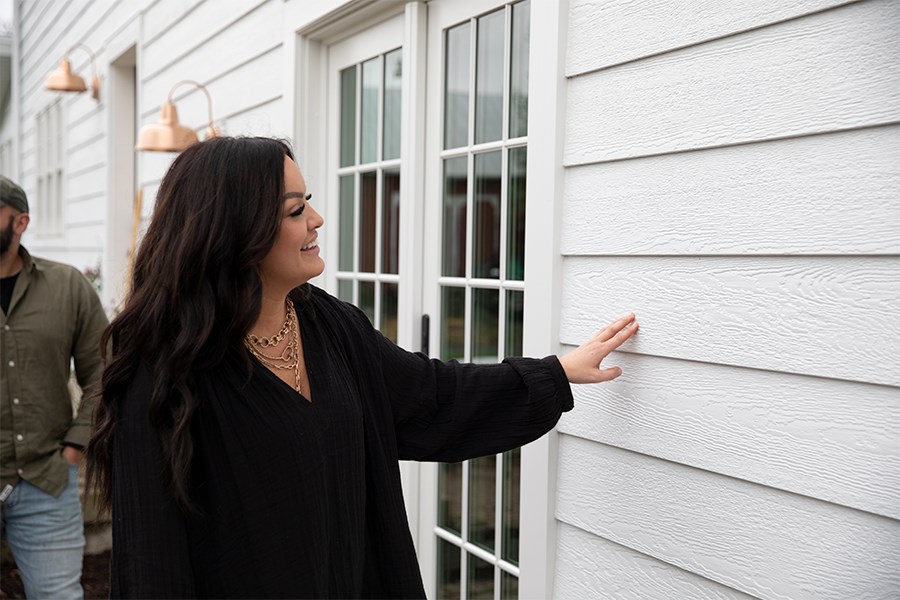 Collaboration with the Contractors

“Not all contractors are willing to talk, answer and explain the process or areas that homeowners need to be aware of,” Galvan says. When hiring a contractor, a checklist can be helpful to make sure you’re hiring a great partner in your re-side who will help you feel confident in your new siding.

In Galvan’s case, the Kruse Brothers were on hand to complete the entire project. As trusted LP SmartSide siding and trim experts, “they found some areas that were missing, including flashing and small nail holes in the roof,” she says. “Not only did they fix those, they let us know why it was bad, how they fixed it, and areas to look out for around our house or on others if we buy a different house in the future.”

As they worked the Kruse Brothers also shared typical characteristics of a newly sided house, such as how the engineered wood siding expands and contracts with the weather. “They also explained how the caulking and built-in flashing around utilities and exterior lighting ensures the house is safe from the elements.”

Tackling the Steps to Re-Siding a House

First, the Kruse Brothers surveyed Galvan’s home. “They wanted to do a full inspection, given that the home was built in the 1800s,” she says. This allowed them to be prepared for any problematic or unique areas of the home that reflect the change in building standards over time.

Once the home passed inspection, they measured it for siding material using both on-site and satellite measurements. On day one, the Kruse Brothers began by systematically removing the old siding.

“One of the biggest things we corrected was that the home was never wrapped with a vapor barrier,” Galvan points out. “Our installation crew predicted that the aluminum siding was likely installed before vapor barriers became the standard.”

For that reason, before starting on the siding the Kruse Brothers installed a vapor barrier. “We have already noticed fewer drafts throughout the home,” Galvan reports.

“From there,” Galvan says, “the bottom boards were installed, and they worked their way up,” finishing the project with trim around doors and windows, caulk, and paint touch-ups on any exposed engineered wood.

“It was an instant transformation—it instantly looks like a new farmhouse again,” Galvan says. “Our entire remodel has all been inspired by bringing the farmhouse from the 1980s back to the 1800s, and now it really looks like the original home again.”

In fact, Galvan was so impressed with the complete transformation that she highlighted the re-side in her latest guest appearance on The Today Show with Hoda & Jenna:

Galvan and her family have also noticed that going from aluminum siding to an engineered wood siding style meant the home became much quieter.

Throughout the process, Galvan also prioritized keeping her home—her largest investment—structurally sound and safe, and she encourages other homeowners to think the same way.

“We found some problematic areas that are now corrected,” she says, “and these could have created major problems in our home, taking a hit on the budget that could go elsewhere.” For example, finding that the home was not wrapped in a vapor barrier allowed her to rectify the problem and likely reduce her heating and cooling bills. “Needless to say, it was an investment that we always think is a great idea for homeowners looking to keep their house safe,” she says.

Interested in re-siding your home? Check out more information about LP SmartSide Trim & Siding and get in touch with an expert contractor.

How to Create a Welcoming Exterior

When the weather gets warm, spending time outside is a high priority on everyone’s list. But often the outdoor areas of our homes need a little sprucing up before they can be the fun spaces we love to gather and enjoy the weather, especially after a hard winter season.

Siding is a protective material attached to the exterior of a house or other similar structure, such as a multifamily dwelling. On a house, siding is what helps defend against weather, impacts and other intrusive elements, such as insects. It also adds curb appeal and can help homeowners express their personal home style.

There are many factors to consider: the cost to put new siding on a house, hiring a siding contractor, and choosing the most durable siding available. Getting organized can be a challenge, and that’s why we’ve developed an easy to use worksheet to help you plan your re-side. It can serve as a way to organize your thoughts and start conversations with your contractor.

Outdoor Spring Cleaning Checklist: How to Get Your Backyard Ready for Spring

Move aside, Old Man Winter—it’s officially springtime. Could your home’s exterior use some sprucing up before you’re officially ready to soak up the sun? This spring cleaning season, make sure you’re showing some TLC to both the interior and exterior of your home.