LP® FlameBlock® Fire-Rated Sheathing was used in a UL-listed 349 wall assembly in a 2-hour fire-rated wall for a senior living center called Summit Vista. After being trained on the benefits of LP FlameBlock sheathing, team members from Utah-based Burton Lumber played integral roles to ensure that all partners—including the builder, code official and framer—were comfortable with the product and understood its value.

When Brian Carlson, general manager with Burton Lumber, saw that the Summit Vista project was specified for LP FlameBlock sheathing, he decided it would be a great opportunity to implement a new pre-construction planning meeting. Because this was the first time that LP FlameBlock sheathing had been used on a project of this scale in Salt Lake City, the team at Burton Lumber wanted to see that their customers understood the value of the product and had no hesitations or qualms.

In October 2017, Burton Lumber met with all key project stakeholders for a pre-construction meeting. Carlson wanted to make sure that everyone throughout the chain had a good experience with it so that they would continue to specify it, use it, and build with it. In the meeting, Brian and his team shared LP FlameBlock literature of all kinds and showed their commitment to educating all parties involved. “We wanted to let them know that we would be there at any point of the way to support,” said Carlson. “We had the builder, the framer, and the building inspector attend the meeting. It’s hard to get everyone together at once, but this project is so large that it was in everyone’s best interest to be there when we put the schedule together.”

Carlson also supplied a demonstration wall made with pieces of LP FlameBlock sheathing as a resource for the framers who had not used the product. Initially the framers asked if they would need extra tools or special cutting equipment. Carlson assured them they would not. “We met with them, showed them how it handled, and answered all of their questions. The framers had no problem with it during construction,” said Carlson. 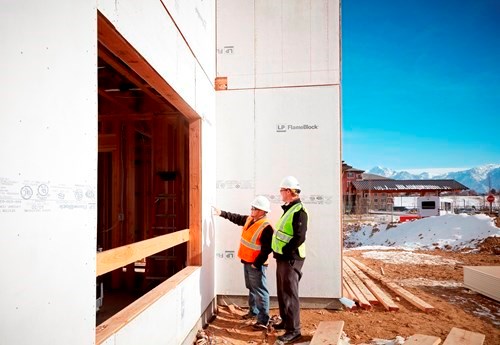 Summit Vista is being built in phases. Burton Lumber placed a bid for the second building in the community, competing with other local lumber dealers for the job. Because of their commitment and assistance with the use of LP FlameBlock sheathing, they secured the bid for the second building where the product will once again be used for the UL-listed 349 wall assembly. Through teamwork they created a safe, fire code compliant building and a model for success for the additional buildings at Summit Vista. “The preconstruction meeting we had for this project is now the benchmark for every project moving forward,” said Carlson. Burton Lumber continues to support the specification of LP FlameBlock sheathing in more and more multifamily projects across the state. In a few cases, they’ve even provided new architectural drawings with LP FlameBlock assemblies to demonstrate how it can be used. They also communicate to the framers how it can save them time and money in the long run. “A big advantage of LP FlameBlock is the sheet sizes,” said Carlson. “I can get it in 8- and 9-foot lengths, where with plywood I can only get it in 8-foot lengths. The framers can go from plate to plate and don’t have to block it. It saves them time.