In the construction process, there are many factors to consider. Among these factors is whether to use one-sided LP® FlameBlock® Fire-Rated Sheathing or two-sided LP FlameBlock sheathing. To help explain the reasons one assembly is used over another, we caught up with Scott Johnson, Manager, Construction Services at LP Building Solutions.

Before diving into whether to use LP FlameBlock two-sided sheathing or one-sided sheathing, let’s take a look at the features and functions of this innovative material.

LP FlameBlock Fire-Rated Sheathing combines flame-spread resistance and burn-through resistance in a single panel. The fire-rated sheathing is evaluated to meet code requirements for fire-resistant construction and does not require reductions in strength. LP FlameBlock sheathing has the versatility to be used in most types of construction and is a listed component in fire-resistance-rated wall assemblies.

Both one-sided and two-sided LP FlameBlock OSB sheathing are favored among contractors because they can help speed construction time and help reduce labor and material costs by potentially eliminating a layer of gypsum.

The primary difference between one-sided and two-sided panels is simply whether the proprietary coating is applied to one side or both sides of the panels. It’s the Pyrotite coating that gives LP FlameBlock sheathing its fire resistance.

So how do you choose between the two? “This is generally dictated by the assembly, application and the construction type,” says Johnson.

“For walls there are two things to check: the first is the UL assembly requirement. The second is to consider the type of construction and application you’re using,” says Johnson.

However, there are exceptions for determining to use one-sided or two-sided sheathing based on the UL listing. “For example, there are UL assemblies that require only one-sided. But if that assembly is for an exterior wall in Type III construction, two-sided LP FlameBlock panels must be used. Always reference the Applications section of ESR-1365 on where two-sided FlameBlock sheathing is required,” says Johnson.

“Again, factors such as type of construction, occupancy group and fire separation distance will dictate fire-resistant requirements,” he adds. 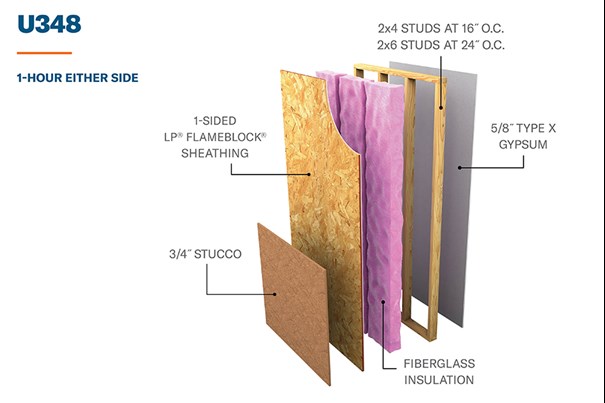 UL Design No. V340 assembly is another example where, when installed in Type III construction for an exterior wall, two-sided LP FlameBlock sheathing is required.

To keep pace with the last several years of changes related to homebuilding, you likely need to shift your business plan—let’s take a look at a few ways to navigate this.

Communicating the benefits of the LP® Structural Solutions portfolio for a sub-floor kitchen remodel or sub-floor bathroom remodel can be a key difference in positively reinforcing the value of the overall renovation.

The Importance of Vented Soffit

LP® SmartSide® Vented Soffit provides continuous ventilation for the roof, and it’s made with the same durable materials and and boasts the same great aesthetics as LP SmartSide Trim & Siding.

We caught up with several team members at LP Building Solutions to get their takes on the upcoming year and how our products tie to key challenges, new building trends and more.